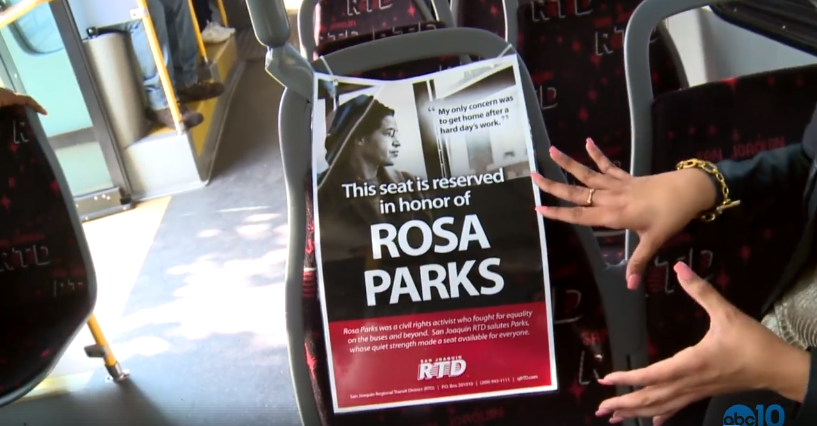 It was more than six decades ago that Rosa Parks refused to give up her seat to a white man in Montgomery, Alabama on Dec. 1, 1955. Today, Parks would’ve turned 105 years old.

To honor the civil rights activist, San Joaquin Regional Transit reserved a seat for her in the front of more than 100 busses with a picture of Parks, and a quote that says, “My only concern was to get home after a hard day’s work.”

“I looked at that sign, and for a moment, I paused. It made a difference in my life today,” said RTD passenger, Esther Singh.

The 65-year-old told ABC10 that Parks has made a big impact in her life.

“She was a powerful woman, she was a wife, a mother, a hard worker. For her to take that stance against having to sit in the back of the bus – she took that step that all of us today should take in what we believe in,” Singh adds.

Singh says Parks’ fearless actions motivated her during times when she experienced injustices.

“She was a great inspiration for me in the working world. When I was a young mother – a single young mother working – I had to stand up for my rights, my payroll, for my vacation time,” Singh added.

Williams told ABC10 he hopes passengers take a moment to reflect and remember that it was Parks’ quiet strength that made a seat available for everyone.

RTD will have the posters up until Monday, Feb. 5.