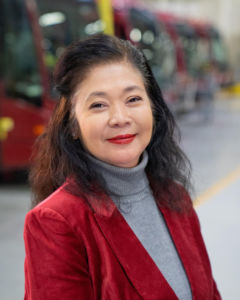 Ms. Salazar assumed the role of RTD’s Chief Executive Officer in January 2020 with over 28 years of experience in the transit industry.  Her leadership as Deputy CEO greatly contributed to RTD receiving the coveted Outstanding System of the Year Award by the American Public Transportation Association (APTA) in 2018.

Because of Ms. Salazar’s business acumen, RTD has consistently delivered balanced budgets without incurring long-term commercial debt.  Informed by her prior experiences in public transit auditing, general accounting, grants, and project management, Ms. Salazar designed effective business processes and implemented robust systems for RTD.  This includes initiating a financial reporting system which earned RTD a Government Finance Officers Association (GFOA) award for 16 consecutive years.  In addition, she has been instrumental in the funding and building of long-term infrastructure projects such as RTD’s Downtown Transit Center and Regional Transportation Center.

Ms. Salazar is also a dynamic personality who mentors her staff to help them grow and achieve their professional development goals.  Due to this investment, she has built a strong management and employee team.  She relishes the opportunity to share her knowledge by teaching for the University of the Pacific and Willamette University’s Transit Management Certificate Program.  Her passion for developing and encouraging others was recognized with the John Lopez Inspirational Award, which is the highest honor given at RTD to an individual who inspires others and embodies the ideals of service and excellence.

Born and raised in the Philippines, Ms. Salazar finished her Bachelor’s Degree in Accounting, magna cum laude.   She left behind an already illustrious career as a Certified Public Accountant in 1987 to come to the United States.  Rising through the ranks at various firms while completing a Master in Business Administration Degree, she passed all parts of the Uniform CPA exam in the first sitting.  A graduate of Leadership APTA and a participant in two international mission studies, Ms. Salazar currently serves on the California Transit Finance Corporation (CFTC) board.  In 2017, Ms. Salazar was also honored by the Central Valley Asian Chamber of Commerce for breaking through the glass ceiling in her leadership and community service. 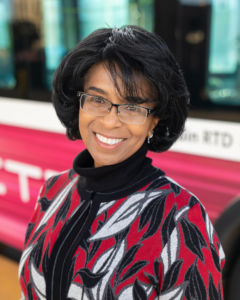 Ms. Gayle was appointed RTD’s Deputy CEO in January 2020. Prior to this position, she served as RTD’s Chief of Legislative Affairs and Grants since 2019. Prior to joining RTD, she had an extensive career as a public official at the California Department of Transportation (Caltrans) and the Federal Transit Administration (FTA). After working in Sacramento and Washington, DC for 37 years, she has returned to her hometown of Stockton to help support the transit system she once used as a teenager to get to the mall, the park, or to school.

Kimberly is well-known as a seasoned professional in the transit industry. She has garnered the respect of her colleagues throughout her career and through participation on national committees such as the American Public Transit Association, the Community Transportation Association of America, and the Transportation Research Board.

In 2009, the American Association for State Highway and Transportation Officials (AASHTO) honored her as the national chair of the Multi-State Technical Assistance Program. From 2012-2017, Ms. Gayle received various awards from the U.S. Secretary of Transportation for her leadership in the federal transit re-authorizations and on the 2016 Presidential Transition Team; she has also received various awards from Caltrans and FTA.

Kimberly holds a Certificate in Management from CSU, Sacramento; Transit and Paratransit Management Certificate from UOP; and an AA in Business from San Joaquin Delta College. 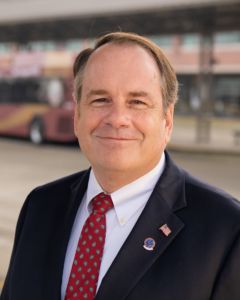 Mr. Thompson joined RTD in 2010 as IT Manager. Prior to joining RTD, he gained depth and breadth of experience in IT management, application development, access management, compliance, and security through his years as a consultant and as an employee at both Sun Microsystems and Hewlett-Packard. Over his career, Mr. Thompson has specialized in strategic application of technology to solve business problems. Mr. Thompson holds a bachelor’s degree in Management Information Systems, a Master’s Degree in Business Administration from New Mexico State University, and has a Transit Paratransit Management Certificate from the University of the Pacific.